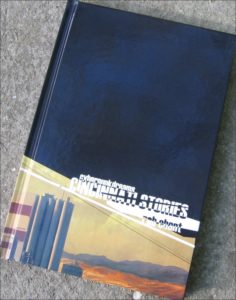 The United States is broken. Torn apart by wars of secession, ecological disaster and political conflict. The mid-west, poisoned by biological and chemical weapons, has become a barren, infertile wasteland. The cities, straining under the weight of the ensuing refugee crisis, have succumbed to rampant corruption and urban decay. On the border of order and chaos, civilization and barbarism, lies the city of Cincinnati.

This is bleak, uncompromising cyberpunk. This is our future.

cyberpunkdreams: cincinnati stories was successfully funded on Kickstarter in September ’17, hitting its target in a couple of days and going on to reach double the funding overall. The book was made available in digital, softback and hardback formats, with final delivery being completed over summer ’18.

“It is a great fucking piece of fiction. The language is dense as fuck, dripping with references and allusions and really gets the imagination going. Well worth your moneyz.” – Random Facebook Guy

“Dig this. Glad I bought in. So grimy and violent. The city is beautifully selfish and paper thin.” – Peter Vartanis, Kickstarter Backer

“Vivid, visceral, and violent … I’m excited about what is to come.” – Isaac Wheeler, Neon Dystopia