Future Anxiety: The Roots of Cyberpunk

November 2019 reached an interesting milestone, well documented by geekdom. We officially reached the month and year in which Ridley Scott’s 1982 film Blade Runner is set.

So, are we living in the future now? Or, to be more specific, are we living in the future imagined by the dazzling and oppressive cityscapes of Blade Runner? Well, there may not be replicant humans hiding from specialised police. We also may not have flying cars or off-world colonies – yet anyway. However, a world of increasing urban isolation and environmental ruin, ruled by a technocratic corporate oligarchy may be more familiar.

Was Blade Runner really about 2019 though? Numerous articles have already been written, detailing what the movie got “right” or “wrong” about the present day. As much as science fiction makes us think about the future, it is always, to an extent, about us now. Blade Runner and the emergent cyberpunk genre are rooted in the context of the early 1980s and the cultural developments that occurred up to that point.

Unlike today, where digital technology is ubiquitous, the 80s was a period where such advancements were only beginning to enter the zeitgeist. The late 70s saw the release of the first commercially-viable personal computers. This, coupled with the ongoing development of the internet, was the beginning of the Information Age: when technology previously only seen in the hands of governments, corporations, and universities were made available for ordinary people.

What is vital to note then, is that cyberpunk emerged at the cusp of the digital revolution, when the potential impact of these new technologies could only be imagined.

An interesting comparison can be made with the “Golden Age” of science fiction in the 1940s and 50s, which detailed an almost utopian vision of technological advancement and space-age exploration before the reality of such progression was made apparent.

This “Golden Age” took place in a different time, when the United States was experiencing the post-war economic boom. Science fiction was also relatively in its infancy, and in the 60s several authors in both the US and UK began to consciously shift the genre’s themes.

“Science fiction should turn its back on space, on interstellar travel, extra-terrestrial life forms, (and) galactic wars.”

Ballard’s and other authors’ desire to move science fiction into more experimental and “mature” territory coalesced into the New Wave of the 1960s and 70s.

Moving away from “hard”, physics dominated science fiction, the focus was turned inwards, to the psychological effects of human advancement, the feared impact of nuclear war, and the existential horror of humankind’s cosmic insignificance.

The movement took influence from a growing counterculture in major cities like New York and London, whose impact on literature was significant. Works like William Burroughs’s Naked Lunch pushed the boundaries of the novel and acceptability in America, and was one of the last works to be put on trial for obscenity.

Burroughs himself proved a major influence on the subsequent generation of science fiction writers. Michael Moorcock, the editor of New Worlds magazine, which published many boundary-pushing stories, wrote that Naked Lunch was a “breath of fresh air […] It was joyous absurdism which somehow spoke directly to me.”

Naked Lunch itself wove together a tapestry of subversities and genres: hard drug use, sexual depravity, noir, satire against American culture, and a kind of mutant science fiction – set in the nightmarish city of Interzone (a stand-in for post-war Tangiers). All essential building blocks for cyberpunk. 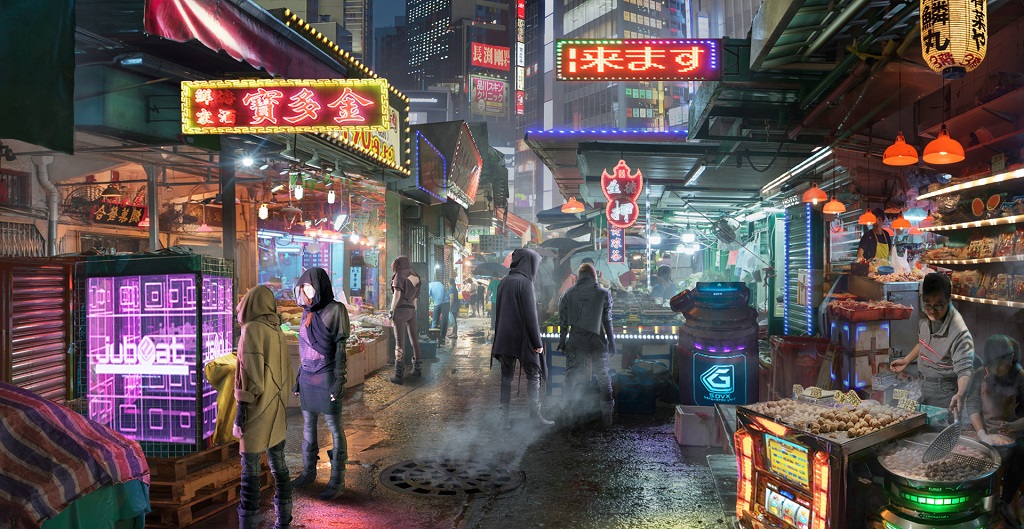 Burroughs himself was partly the reason why Blade Runner has its title. While the film draws its basic plot structure and characters from Phillip K. Dick’s Do Androids Dream of Electric Sheep?, the title itself is lifted from the 1974 novel The Bladerunner by Alan Nourse.

Due to a totalitarian regime that has ruled anyone who falls sick must be sterilised, the Bladerunners in Nourse’s work are medical couriers that deliver care to patients under the radar. Burroughs had read the novel and enthusiastically produced a treatment titled Blade Runner: A Movie. The title was picked up by screenwriter Hampton Francher, who drafted the first versions of the screenplay for Androids, and subsequently leapt on by Ridley Scott.

By the late 70s, science fiction was a long way from its “Golden Age”. America too had left its economic boom behind, having experienced a recession from 1973-75. With the sharp decline of the hippie movement and events like the Watergate scandal, it is no surprise that punk, a more nihilistic and anger-driven aesthetic came into popular awareness.

Indeed, the punk aspect of cyberpunk is vital to understanding it as a genre; many see it only as an aesthetic when from the beginning it had strong rebellious political leanings. The onset of conservative neoliberalism, with Thatcher and Reagan taking power only served to solidify cyberpunk’s anti-authoritarianism. As William Gibson wrote in 2004:

“If I were to put together a truly essential thank-you list for the people who most made it possible for me to write my first six novels, I’d have to owe as much to Ronald Reagan as to Bill Gates or Lou Reed. Reagan’s presidency put the grit in my dystopia. His presidency was the fresh kitty litter I spread for utterly crucial traction on the icey driveway of uncharted futurity. His smile was the nightmare in my back pocket.”

Alongside Blade Runner, Gibson’s Neuromancer is the other defining cyberpunk work. Both Scott’s film and Gibson’s novel were prescient in their depictions of corporate-controlled societies. Gibson writing about, “The icey driveway of uncharted futurity,” is an excellent metaphor, because it illustrates how science fiction writers responded to contemporary anxieties by creating a vision for the future.